Reflections from Teams Teal and Orange

Team Teal is having a great time at the Soul Reapers Church of Christ! We have been tasked with some landscaping, roofing, and putting on a small VBS (more like a time for hangout with the local kids); working entirely with the Orange Team throughout. Landscaping has been a lot of work, as we have been clearing all the trash, extra brush, and and dead palm leaves from all over the property, and transporting it all into one massive pile. The biggest way that our two teams saw God move through our landscaping was in finding a shopping cart in the middle of the brush, completely buried! That shopping cart was then used throughout the rest of the landscaping in transporting leaves, brush, and anything else that would fit. It was a huge blessing, and a huge way our teams saw God provide for us.

Originally, we were unsure of what would happen to the large pile, and we did not want to just leave it, but that is where God stepped in! He provided a larger dumpster that was delivered to our site, where we were able to transport all of the trash, brush, and even some extra trash that the church had hoped to get rid of. It was exactly what we needed, and we were so thankful for the way that God provided for us again in that moment!

In terms of roofing, the church had some roof damage and as the rain came down, it came into the church. Due to the damage, they had lost a lot of regular attendees and were unable to expand their ministry. Thus far, we have been able to locate the damage, put in new support beams and planks to cover the large hole that was produced, and we will soon start shingling! It has been incredible to see the gratefulness in the faces of the pastor and other Soul Reaper attendees that have seen the work done. It has certainly made working in the hot, sticky sun all worth it! It has also been incredible to see the way in which God is working through us in supplying energy and times of rest to allow us to be fully productive.

The most frantic, yet fun part of the week was Monday around 2 o’clock when kids starting arriving for the VBS we had publicized, and the crew that was supposed to arrive and coordinate the VBS was not there. We quickly learned that the crew was not coming due to some small communication issues, and that we would be responsible for hosting the VBS. Though unexpected, we reveled in the moment where God was calling us to stretch ourselves and abilities, and individuals from both the Orange and Teal Teams stepped up in major ways to spend time with the kids and we were able to provide a fun time of games, sports, and sharing the love of Christ. In that moment both teams realized that God is so much greater than the stress we faced as unexpected challenges arose. God provided the materials, energy, and creativity we needed to provide for the kids!

Personally, island life has been a great eye opener as to just how busy American life is. In America, everyone is constantly on the go, striving to make the most of the small amount of time we feel we have. Our slogan for the week has been “island time,” meaning that all time frames given for activities should be taken with a grain of salt! For most people, that has been a big adjustment and a big way in which we have had to trust God.

God has been moving greatly this week, revealing to us His plan, and the way in which He is calling us to trust Him. We are a tired bunch, but we feel renewed through God’s love in our faith and relationships with others, and we are ready to end the week on a high note! 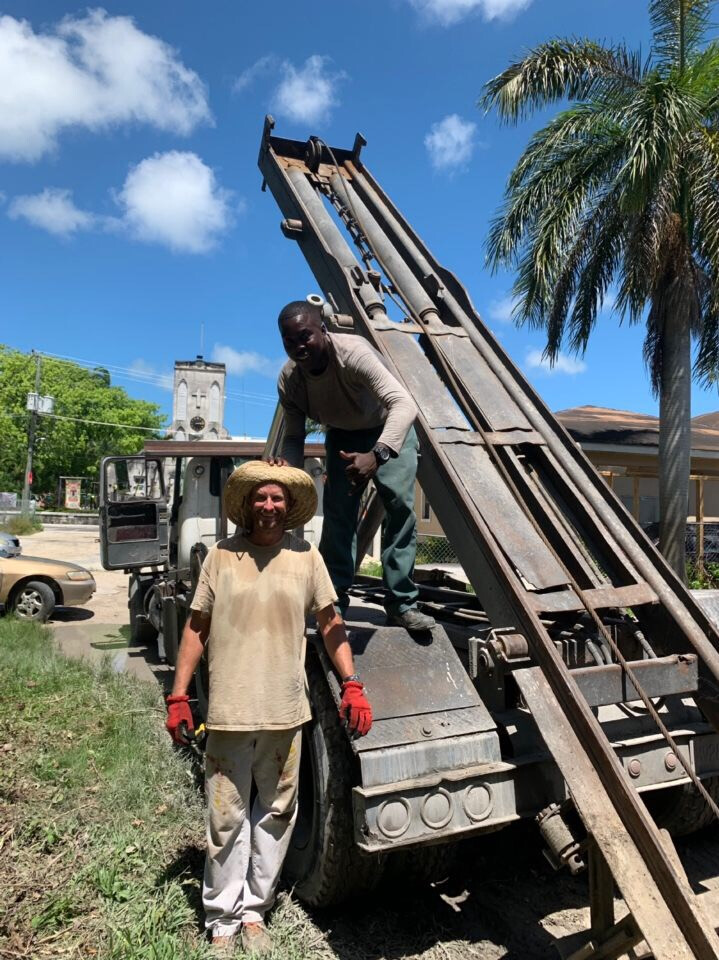 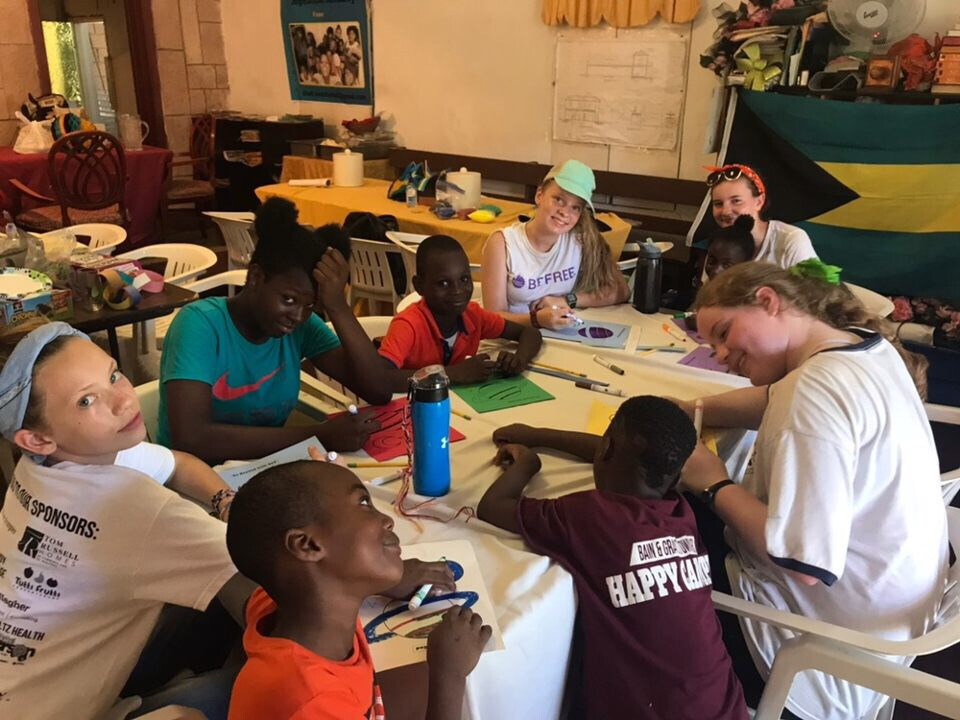 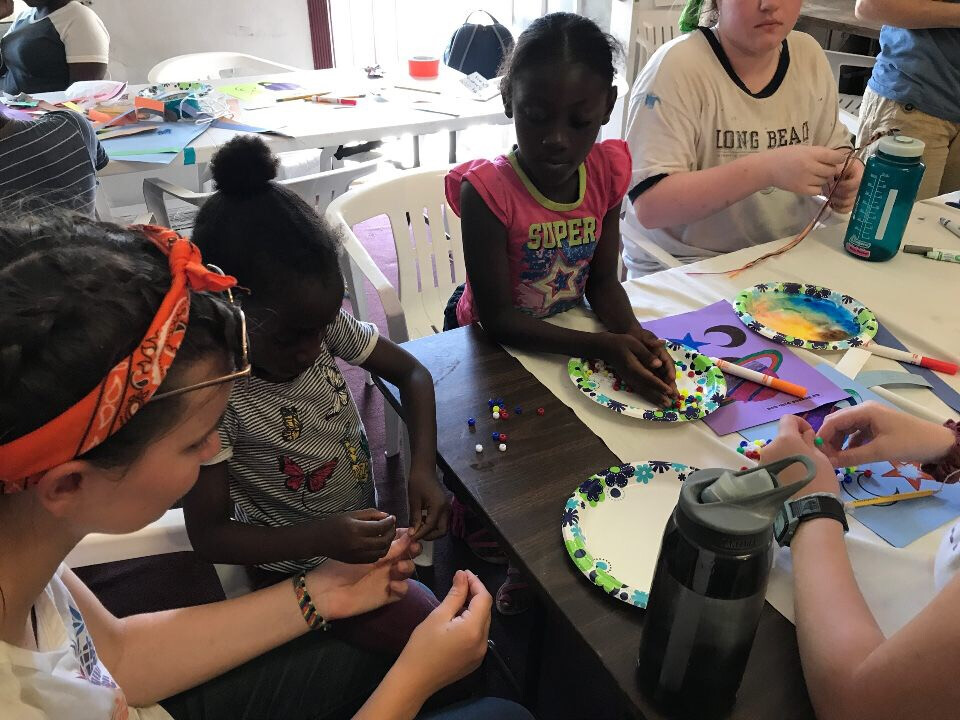 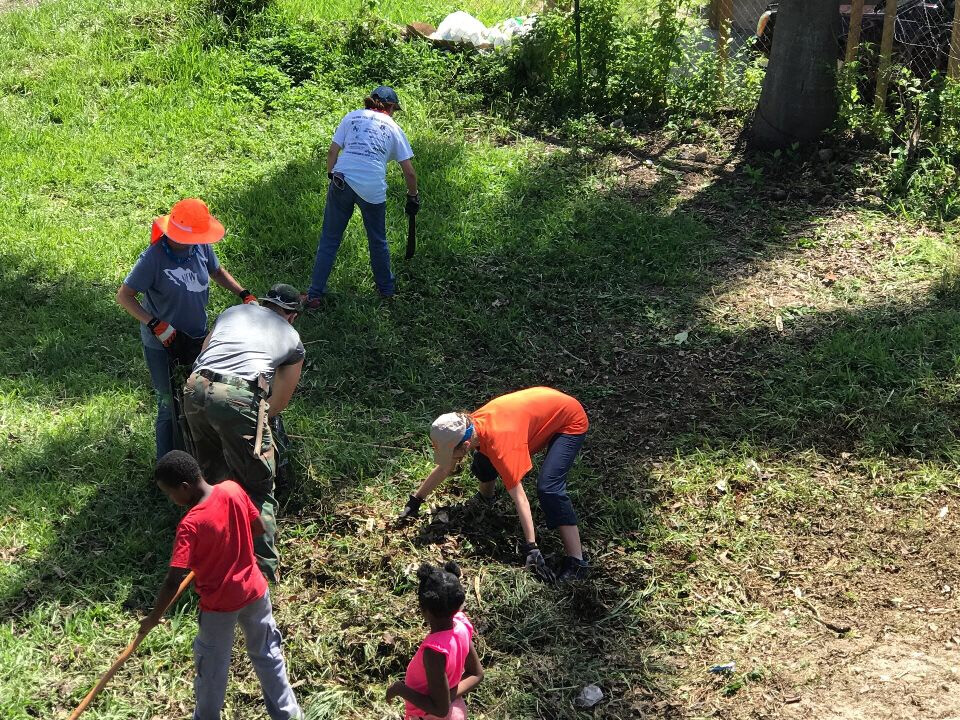 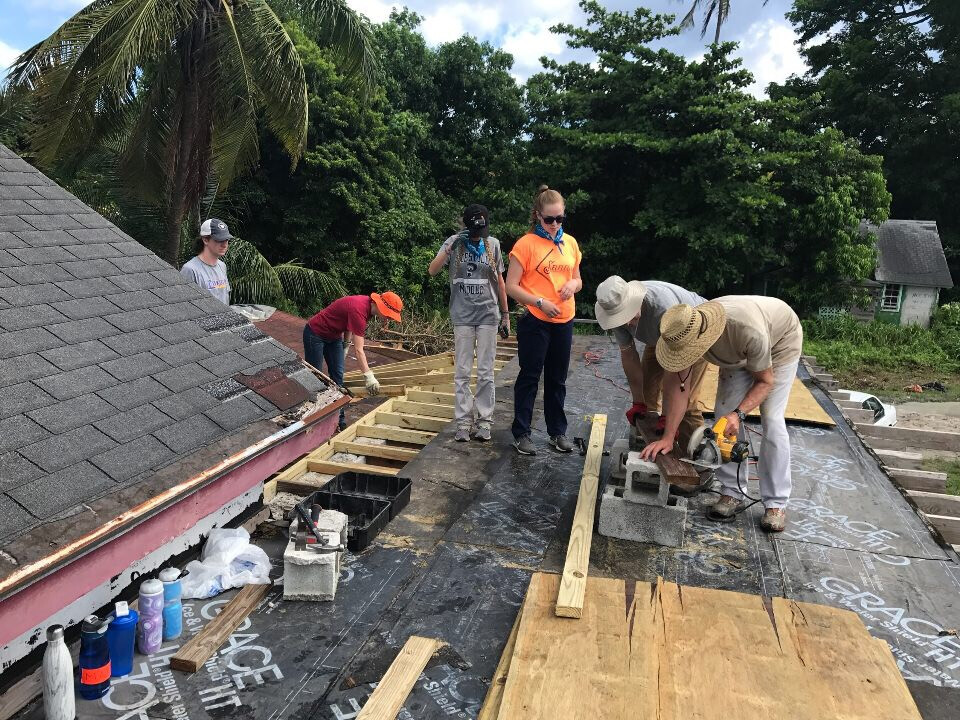 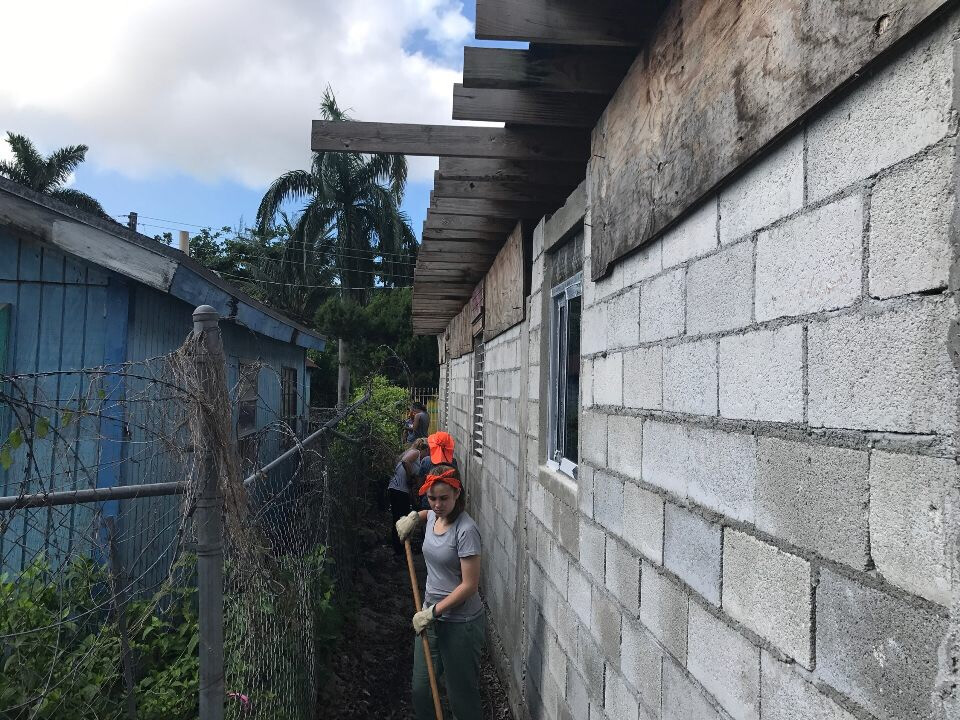 A Smile is Worth Everything

Team green and blue arrived at the work site to a worn down house and its owner named David Longly. The first goal was to cut twenty meters of jungle and brush that had many surprises. These surprises included a bathtub, an unfinished foundation to a house, and lots of wildlife. After the first day of brush whacking, the second goal was to paint his house with a fresh coat of blue and white paint. Neighbors and onlookers kept encouraging us as we went about our day. The most rewarding part in the end was watching David (the homeowners) face when all the brush was cleared and his house reemerged before his eyes. To see his eyes light up from something we did is all worth the pain, sweat, and time. 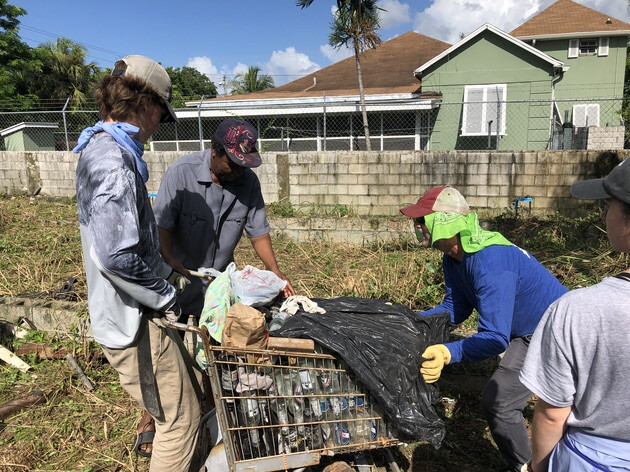 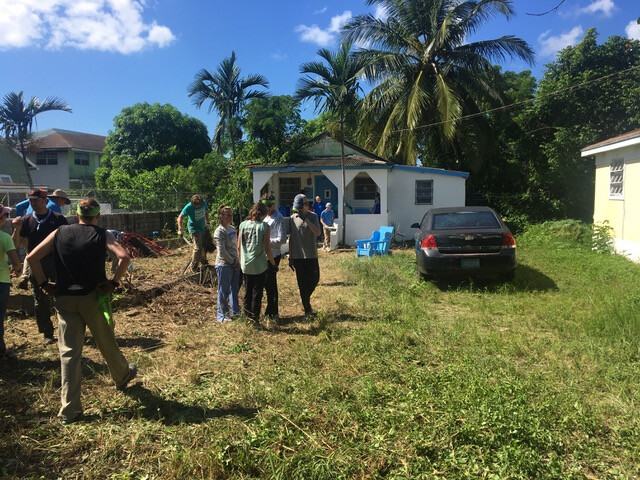 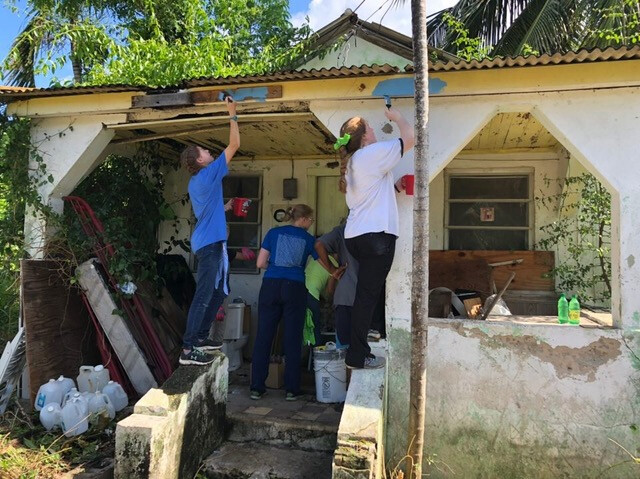 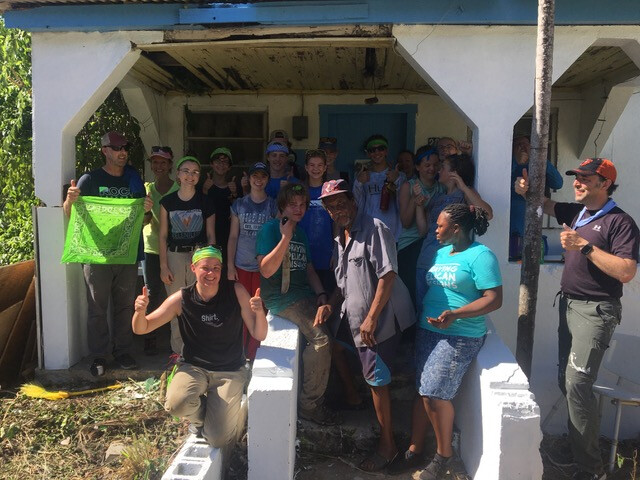